Welcome to the Kora Ladies page!

Please look around, and explore below.  Also, feel free to click on the button below to sign up for the Kora Ladies Konnection emails! 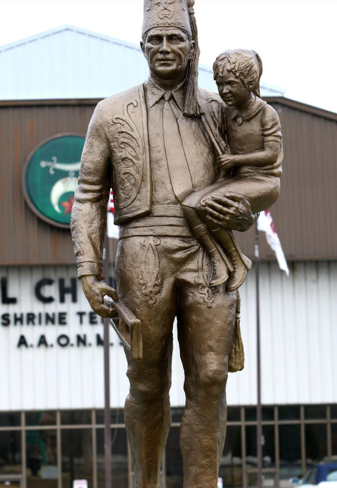 Isn’t it Great to be a Shriner!?!? Deb and I would like to thank everyone that attended Kora’s installation.  It was awesome to see so many Nobles and their Ladies in attendance and to feel the enthusiasm and energy in the room!  Deb and I enjoyed the day and appreciate all the well wishes we received. We look forward to creating new memories in 2022!

This year is a year of reflection and remembrance, so our project is to purchase a statue of the Silent Messenger.  The statue will sit on an 8-foot-tall pedestal, and will be set on the right front of the Kora Shrine Center.  To keep the statue safe, it will be surrounded with steel decorative fencing.

To achieve this goal, the Divan will be selling Challenge Coins for $20.00 each.  We also have available 150 limited-edition Kora 2022 Camels.  The Camels will be hand numbered and signed to show appreciation for your generous gift. The Camels are being sold for $100.00 each.  If you are interested in purchasing a Camel, please reach out to me to choose your special number before it’s gone.

We wish for every Noble at Kora to have ownership in this project.  Look to the upcoming Sands to find out about upcoming events and our plans for the year.

Get your limited-edition Kora 2022 Camel

Captain of the Guard Ben Weisner and Lady Cassidy

Daughters of the Nile

Daughters of the Nile is an international fraternal organization for women 18 years of age or older. They are related by birth or marriage to a Shriner, Master Mason, or a Daughter of the Nile. They may also be a majority member in good standing of a Masonic-related organization for girls, or a former patient at a Shriners Children’s™ (with or without a Masonic relationship).

Founded in Seattle, Washington in 1913, Daughters of the Nile members total over 17,800 in 131 cities throughout the United States, Canada, and South America. Our members are proud of their long association with Shriners International and their continuing support of Shriners Children’s™.

The Daughters of the Nile contribute monetary donations of over $2 million annually to Shriners Children’s™ through our Foundation and Trust. Since 1924, we have contributed over $68 million, second only to the Shriners themselves.  Each year our members give generously of their time and talents by providing more than 180,000 hours of volunteer time at the hospitals. In addition, they sew clothing, quilts, and special projects requested by the hospitals, provide books, toys, games, and other educational/recreational materials, and sponsor parties for patients and their families each month. The annual value of these hours and donated items is in excess of another $1 million annually.

Order of the Eastern Star

Order of the Eastern Star is the largest fraternal organization to which both men and women may belong. Worldwide, there are approximately 1 million members under the causes including: Shriners Children’s, Cancer Research Project, Arthritis Fund, orphanages and many other charities.

Menu
Home
About Us

We're not around right now. But you can send us an email and we'll get back to you, asap.