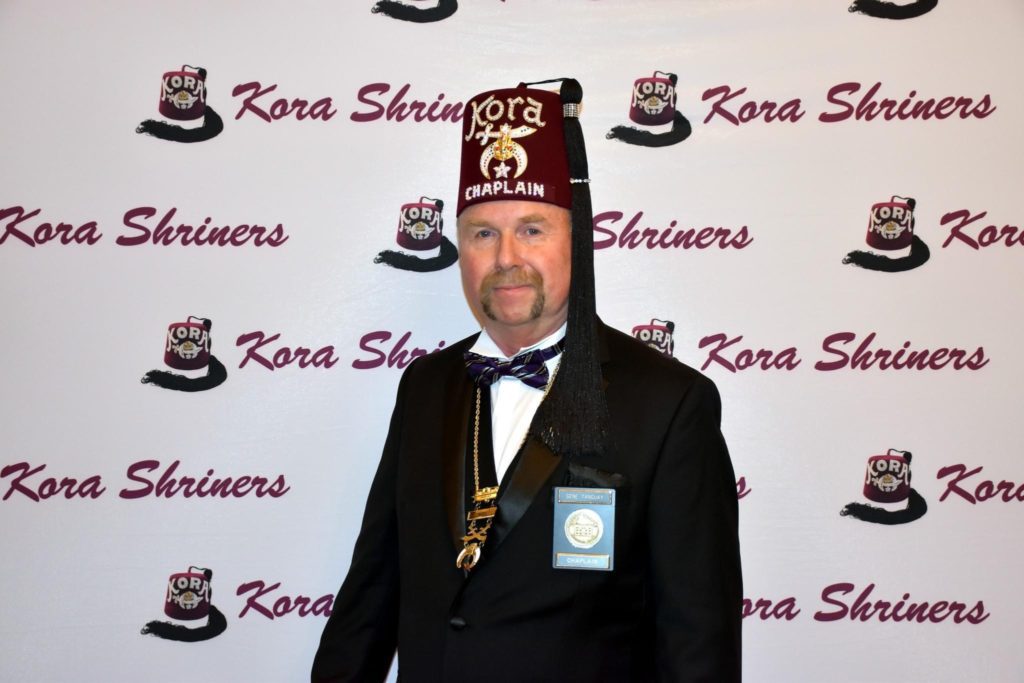 Gene Tanguay grew up in the shadows of Mount Washington in Berlin, New Hampshire. He graduated from New Hampshire Technical College in Berlin, NH with an Associate’s Degree in Industrial Electricity. He worked for several electrical wholesale companies in the Berlin area. In 1986 Gene moved his family to coastal Maine when he took a job as a Marine Electrician for Bath Iron Works. During his time at BIW he completed the Bath Iron Works Marine Electrician Apprenticeship Program.

After 34 years Gene retired from Bath and accepted the position of Field Service Engineer with Boeing in the Bath Maine office where he is still employed.

Gene was raised in Lincoln Lodge #3 in Wiscasset, Maine. He completed his Entered Apprentice Degree on October 15, 1987, his Fellowcraft Degree on December 10, 1987 and was raised to the degree of Master Mason on January 7, 1988. Gene became Master of Lincoln Lodge #3 in 1992 which was the Lodge’s 200 th  Anniversary. In 2006 he affiliated with Bethel Lodge #97. In June 1997 he joined Kora Shrine in Kennebunkport Maine under Ill. Richard Bibber during a joint summer ceremonial with Kora and Anah Shrine Temples. Shortly after joining Kora, Gene became a member of the Kora Funsters where he took on the character of Eeyore, the gloomy donkey from Winnie the Pooh.

On April 1, 2008 Gene, with the help of his Lady Lorraine, Gene started the Kora Buccaneers. He was appointed Director by Ill Glen Lalumiere in 2008 and continues to serve in that current position today.

On January 31, 2007 Gene was presented with the Daniel Carter Beard Masonic Scouter Award. This Award is presented to Freemasons who practice the ideals of Freemasonry and act as role models to the young men who are part of Boy Scouts of America.

For 14 years Gene served as the Cub Master for Bethel Pack 566 followed by serving as the Scout Master of Bethel Boy Scouts Troop 565. Gene also serves on the Board for the Western Maine Mountain Jeepers as well as serves as a trail guide for the Maine Mountain Jeep Jamboree.

In 1981 Gene married to the former Lorraine Wright and they reside in Gene’s Grandfather’s former summer home in Albany Township Maine. Together they raised two sons, Mark and Adam. Mark and his wife Laura and their daughter Isla make their home in Needham Market, England. Adam is also a member of Kora Shrine and lives in Hebron, Maine.

Gene and Lorraine enjoy spending time in both England and the United States with their family. Their granddaughter Isla has a special place in their hearts. Even though they can’t spend a great deal of time with her they spend many hours video chatting with her and her parents. Making memories with family and friends is an important aspect of both Gene and Lorraine’s lives.

Jeeping has become an essential part of their lives whether it be off roading in Gene’s jeep with the Western Maine Mountain Jeepers or exploring the historic covered bridges of New England in Lorraine’s jeep.

Copyright All Rights Reserved © 2023 | Website Designed and Developed by Levin